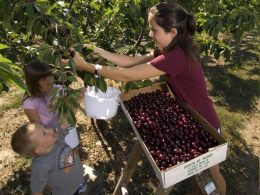 Wow! The USA Today chose a few Pick Your Own Farms from around the country to talk about in their USA Today Travel Experience Weekend section, March 11, 2015. Santa Barbara Blueberries made their list!  The article was written by Susan B. Barnes. Thank Susan!  Click "Read More" below to read the article in its entirety.  Look for Santa Barbara Blueberries near the end of the article.

Did you know Santa Barbara Blueberries also shows up as a prime place to go on the Visit Santa Barbara, The American Riveria website Unsurprisingly, we show up under Food & Drink | Farms Stands and UPick.

Though winter's grasp still has a stronghold on most of the USA, there are spots where the weather's broken and spring is well on its way. But no matter where you are, the tastes of spring have already arrived in the grocery stores. Here's a look at places around the country where you can go out and pick your own, now and well into the spring and summer.

It's already strawberry season in the Sunshine State, and the Florida Strawberry Festival in Plant City is underway. Catching the scent of shortcakes piled high with red, ripened berries inspires many to go out and pick their own, which is easy to do in Central Florida. Plant City, just west of Tampa, is well-known for their berries, and the fields at Spivey Farms are ripe for the pickin'. Outside of Orlando, the fields at Pappy's Patch U-Pick Strawberries in Oviedo are in abundance, as are those at Farmer Mike's U Pick just north of Naples.

Blueberries are another terrific U-Pick fruit, and crops are at the ready late-March/early-April in Florida. Big Bear Farms in Plant City and Blueyouth Berries in northwest Tampa (where you'll want to return late-May for blackberries, too!) both feature the succulent blue fruit.

In Wisconsin, Barthel Fruit Farm opens its crops for U-Pick in May, starting with herb plants, and followed up with strawberries and sugar snap peas in June and July; apples sneak onto the scene as early as August.

Ohio jumps into the U-Pick game in late-June with raspberries, blackberries and blueberries at Lynd's Blue Frog Farm in Johnston (25 miles east of Columbus), where you can keep pickin' through August. Blueberries will also be ripe over the summer at The Blueberry Patch in Mansfield (60 miles northeast of Columbus), and U-Pick raspberries and blackberries will be ready early-August.

Across the Mississippi River from St. Louis, Eckert's Country Store & Farms is the largest family-owned U-Pick orchard in the entire USA. Like most, the farm starts in the spring with strawberries in May, and moves to blackberries in late-June, followed by veggies starting in early-July, including sweet corn, tomatoes, kale, and several varieties of peppers, onions, squash and beets.

Just south of Gettysburg National Military Park, ripened black raspberries and dark sweet cherries await picking, quickly followed by blueberries, at Catoctin Mountain Orchard in Thurmont, Md. Hurry, though – the season may be short (through July 8 for raspberries and cherries, and July 25 for blueberries), but the yields are sweet!

Twenty-five miles from the center of Philadelphia, Cecil Creek Farm in Mickleton, N.J. is anxiously awaiting the opening of their U-Pick season this spring. Nearly ready to pick are loads of herbs, snap and lima beans, snap and snow peas, tomatillos, cherry and plum tomatoes, and strawberries.

In Massachusetts' the Berkshires, sweet and tart cherries are ready for picking early- to mid-July at Lakeview Orchard, followed by summer raspberries and red currants, with apples starting to shine mid-August.

New York's Finger Lakes Wine Country region gets in on the U-Pick action in a unique way. A large portion of pickers at Fulkerson Winery are at-home beer crafters and winemakers, and use yields from the farm's crops to create their own personal brews and blends. That's not to say that the general public isn't invited to U-Pick, though! Starting at the end of June, everyone's welcome to go and pick cherries through July, and when August rolls around, apples, grapes and peaches should be ready.

Think of Nevada and agriculture may not be the first thought that pops into mind, but that's just what you'll find at Gilcrease Orchard in Las Vegas. Already ready for picking? Beets, asparagus, kale, bok choy and other leafy greens (through May). And when those crops give out, apricots, peaches, pears, figs, plums, pluots and apples will be ripe through August. It's also in August when tomatoes and raspberries will be ready at Lattin Farms in Fallon, about an hour east of Reno.

Outside of Mesa, Ariz., it's already time to start harvesting at Schnepf Farms. Grab a basket and one of the farm's bikes and head into the fields where you'll find all types of vegetables, from carrots to beets, broccoli to turnips, and all sorts of lettuces. When April rolls around, it'll be time for squashes, sugar snap and black-eyed peas, green beans and peppers, followed by apricots, peaches, tomatoes and celery in May. Throughout, take home lavender, basil, chives and cilantro! For a real treat, join the farmer on Friday mornings, forage about the fields and enjoy a fresh farm-to-table lunch made from the produce you picked.

The sun and moderate temperatures make farming in Santa Barbara a breeze, and we get to reap the rewards! Blueberries should be ready for U-Pick at Santa Barbara Blueberries at Restoration Oaks Ranch in June and July, but if the weather is especially cooperative, they may open as early as April and go into August. Dates are in the spotlight at Fresh Dates by Anderson in the Coachella Valley desert, about three and a half hours southeast of Santa Barbara.

With its fertile farmlands, it's no surprise that the Greater Portland region of Oregon is a U-Pick paradise! Early- and mid-summer months yield crops of rhubarb and berries, starting with strawberries and moving on to raspberries, blueberries and blackberries, while mid-summer brings cherries, peaches and pears. Lavender is grown here, too, and in bloom June and July. Popular U-Pick farms in the region include Baggenstos Farm Store and Our Table in Sherwood; Duyck's Peachy Pig Farm in Cornelius; Jossy Farms and Smith Berry Barn Farm and Garden Market in Hillsboro (try the milkshakes made with fresh-from-the-farm fruits!); and South Barlow Berries in Canby. Closer to the Columbia Gorge, Root Orchards and Evans Fruit Company is ready to welcome U-Pickers.

Just a bit farther north in the heart of Washington's Cascade Mountains, Blueberry Hills anticipates opening its U-Pick in early-June when more than 16 varieties of blueberries, raspberries and strawberries will be ready for you.

To find U-Pick farms near you to bring the flavors of spring to your table, visit http://www.pickyourown.org.

This article was written by by Susan B. Barnes, in a Special for USA TODAY | Published on March 11, 2015