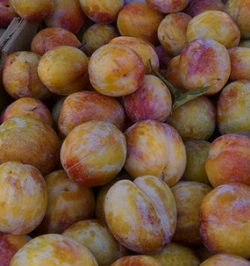 "Dinosaur egg" is a nickname given to some varieties of pluot due to their dappled coloring. This delicious cross between an apricot and a plum happened thanks to a cross-breeding program (not genetic engineering) conducted by California breeder Floyd Zaiger. Pluots are nutritious and are low in fat, so Moms looking for healthy snacks have another great option in the pluot. You can also count on slices of pluot to add some flavor to other dishes.

The strangely named "pluot®" is a hybrid plant grown from a plum and an apricot. Pluots® are extremely sweet, due to very high sugar levels, and are available in a wide range of varieties. The actual ratio works out to around 70% plum and 30% apricot and they mainly look like plums. They have a great deal of nutritious value and are low in fat, making them ideal for snacking or sweetening up other dishes.

Pluots® are sometimes also referred to as "Dinosaur Eggs®" due to the strange dappled coloring on some types of the fruit. The name has actually been trademarked by a California pluot® grower, though there are still a wide range of available types with other strange-sounding names. Varieties such as the "flavor grenade," "dapple dandy," and "flavorglo" are fairly common, as are the "hand grenade" and the "last chance." The "flavor heart" is one of the largest types of pluot®, heart shaped with black coloring and yellow flesh, while the "candy stripe" has pink and yellow stripes with spotted red skin.

Eaters can tell that pluots® are ripe when the fruit gives to pressure and is very fragrant. People should handle them delicately, just like a plum. The pluot's® sweetness makes it a great ingredient for many recipes, such as a cold, summer fruit salad.

They can also be used as an ingredient in ice cream or yogurt, or in a sauce over pancakes. Many people cut them up and add them to breakfast cereals to sweeten them. Blended pluots® also work quite well in smoothies or in alcoholic beverages.

Pluots® are an intensely flavored fruit, often full of vitamins A and C, have a very low fat content, and are sodium and cholesterol free. High sugar content makes them quite sweet, though each one only has about 40-80 calories, depending on size. They are mainly grown in the Central Valley area of California and are available from late May through September.

Many people are suspicious of pluots® thinking that this strange fruit must be genetically engineered, but this is not the case. Pluots® were first sold in 1989 and were developed by a Californian fruit breeder named Floyd Zaiger. It took Zaiger several generations of cross breeding before the modern pluot® finally emerged. Zaiger's work used the "plumcot," a 50-50 plum and apricot hybrid created by Luther Burbank in the late 19th Century, as a foundation for additional hybridization.

This article was excerpted from a post originally appeared in wisegeek.org.