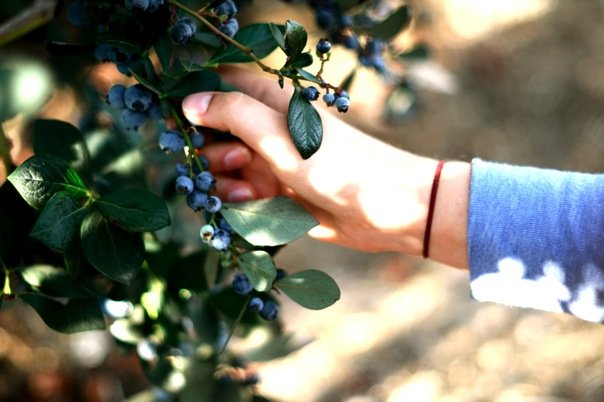 Blueberries are native to North America and you can find them across the "fruited" plains of the U.S. In fact, the first pilgrims learned from the North American natives how to dry the Blueberries and save them for winter, so native Americans had the first processed super food on the continent. Some varieties of blueberries are also native to South America, and the ripening seasons between the two continents is different, hence you see different varieties available at different times of the year.

If you look carefully at your Costco packaging, you may see that the blueberries they are selling you are from Chili or Venezuela. Blueberries are refreshing and tasty, and they span the spectrum from very sweet to tart in flavor, depending on the variety and when the fruit is picked. There have been many studies on the health benefits of blueberries, and blueberries always show up in the top 10 in super foods studies. Consider these two empirically supported reasons to eat lots of blueberries.

1) Antioxidents. Blueberries are high in them. According to the US Highbush Blueberry Council, each one (1) cup serving of blueberries contain 14 mg of Vitamin C and 0.8 mg Vitamin E. Blueberries also contain anthocyanins and phenolics that act as antioxidants. Based on data from the USDA Human Nutrition Research Center on Aging (Boston,MA), blueberries are among the fruits with the highest antioxidant activity. Using a test called ORAC (Oxygen Radical Absorbance Capacity), researchers have shown that a serving of fresh blueberries provides more antioxidant activity than many of the other fresh fruits and vegetables they've tested.

2) Anti-Aging Properties. The USDA Human Nutrition Research Center laboratory found that feeding blueberries to lab rats slowed age-related loss in their mental capacity. This finding has a finding that has important implications for humans. In one study, Jim Joseph, director of the neuroscience laboratory in the USDA Human Nutrition Research Center(HNRC), fed blueberry extractions—the equivalent of a human eating one cup of blueberries a day—to mice and then ran them through a series of motor skills tests. He found that the blueberry-fed mice performed better than their control group counterparts in motor behavioral learning and memory, and he noticed an increase in exploratory behavior. When he examined their brains, he found a marked decrease in oxidative stress in two regions of the brain and better retention of signal-transmitting neurons compared with the control mice. The compound that appears responsible for this neuron protection, anthocyanin, also gives blueberries their color and might be the key component of the blueberry’s antioxidant and anti-inflammatory properties. Blueberries, along with other colorful fruits and vegetables, test high in their ability to subdue free radicals. These free radicals,which can damage cell membranes and DNA through a process known as oxidative stress, are blamed for many of the dysfunctions and diseases associated with aging.